JFD180: Bring me the Head of Alfredo Garcia, Test Tube Teens from the Year 2000, The Oogieloves 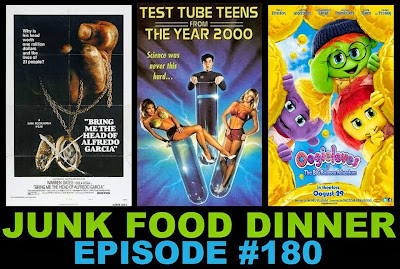 It's a doozy of a week, as this episode features what is probably the three most different movies the world has ever known.

First, a bartender's on a road trip to collect a bounty on a severed head in Sam Peckinpah's "Bring me the Head of Alfredo Garcia" from 1974. This flick was hated by audiences and critics at the time of its release, but has gained ground as a cult classic.

Next, in a dystopian future, sex has been outlawed and two dudes travel back to 1994 to save Earth in "Test Tube Teens from the Year 2000" (AKA "Virgin Hunters"). Director David De Coteau brings this soft core sci fi as the debut film from Full Moon's "Torchlight" imprint.

Finally, puppet creatures throw a birthday party for their pillow in the 2012 kids flick "The Oogieloves in the Big Balloon Adventure." Despite hot stars like Christopher Lloyd and Cloris Leachman, this movie broke the record for biggest financial bomb in history.

Also, if you like the show, please take a minute and subscribe and/or comment on us on iTunes, Stitcher, Blubrry or Podfeed.net. We can only summon Sheetar with your love and support.