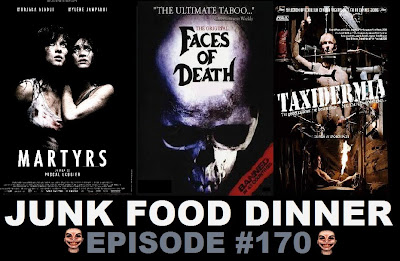 It's that time of year. Ghoul Summer is upon us, creeps! This week, the JFD dudes and reluctant ghoul Mike Dikk, from the Kissing Contest podcast, embrace some self-torture as they fully submerge themselves in three gross, gruesome and of course, ghoulish flicks.

Up first, a young French woman, Lucie (Mylène Jampanoï), who was kidnapped and tortured as a child, and her friend Anna (Morjana Alaoui) seek justice on the people responsible for Lucie's torture. However, as they get closer to finding her captors, they once again become victims of bizarre and brutal torture in the soul-draining 2008 French ghoul film Martyrs directed by Pascal Laugier.

Next, we take a look at many people's first exposure to the realm of ghoulish cinema, Faces of Death from 1978. This pseudo-documentary focuses on the subject of death in all it's many incarnations. While there is quite a bit of gross real-life footage of dead bodies and animals being slaughtered, much of the film has been exposed as fake in later years. Nevertheless, this film still remains a hallmark of uneasy cinema and a pioneer in pushing the boundaries of good taste.

Finally, we get a history lesson in Hungarian history as we take a glimpse into the life of three generations of ghouls in Hungary in the gross-out arty drama-dy Taxidermia from 2006. Directed by György Pálfi this flick combines dick torture, over-eating, puking, love, animal guts, giant cats and, of course, taxidermy.

All this plus ghoulish banter between friends, Nerd News, this week's DVD & blu-ray releases, complete confidentiality, no police involvement, stories about lost innocence, Mike being a butthole, Donald Lloyd of the Junk Food Dinner Warehouse, Junk (voice)Mails, and so much more!

Also, if you like the show, please take a minute and subscribe and/or comment on us on iTunes, Stitcher, Blubrry or Podfeed.net. We gain vats of animal guts from your love and support.
Labels: Faces of Death Ghoul Summer György Pálfi Martyrs Mike Dikk Morjana Alaoui Mylène Jampanoï Pascal Laugier Taxidermia