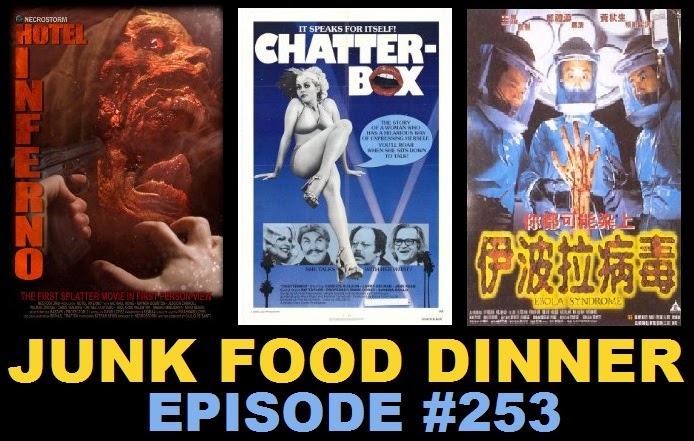 This week on Junk Food Dinner, we are joined by very special guest Patrick Dolan from Rue Morgue to discuss three weird and explicit flicks!

Up first, Patrick brings us a unique first person splatter-fest from the fresh young upstarts at Necrostorm called Hotel Inferno from 2013, where we take the vantage point of a hitman hired to take out some weirdos in a hotel, but when he discovers the people he's working for haven't told him the full story, he is forced to battle his way through various demons and monsters with bloody results.

Next, Kevin finally gets around to covering the film that partially helped propel him into a life-long obsession with 70's sexploiation; 1977's Chatterbox. In this goofy sex comedy, a beautiful young woman (Candice Rialson) is shocked to learn that her vagina can not only talk, but it's got a wicked sense of humor and only thinks about sex. When her singing snatch becomes national news, it's almost enough to drive this poor girl to suicide. Directed by the guy who did Reform School Girls and written by the guy who wrote Savage Streets, with appearances by Rip Taylor and Irwin Corey, Chatterbox has something for everyone.

And finally, Sean brings us Herman Yau's follow-up to The Untold Story, Ebola Syndrome from 1996. Once again, casting Anthony Chau-Sang Wong as a creepy and revolting leading man who kills his boss and escapes to South Africa where he works in a Chinese restaurant and tries to bang hookers. But when he gets infected with Ebola he begins spreading the disease by killing people and then cooking and serving their infected bodies to unsuspecting patrons before ultimately fleeing back to China to spread some more Ebola love.

All this plus witty banter between friends, Face to Face shirt chat, new IMAX projectors that give you ultimate pixels, Blob and Leatherface origin stories, wrestling dog movies, and so much more!

Also, be sure to check out Junk Food Dinner's contribution to the Rue Morgue website this week where we review three of our favorite shot-on-video flicks! Thanks again to Patrick for making that happen!

Got a movie suggestion for the show, want to give your opinion on a movie we talked about or just want to tell us we suck? Drop us a line atJFDPodcast@gmail.com. Or leave us a voicemail: 347-746-JUNK (5865).Also, if you like the show, please take a minute and subscribe and/or comment on us on iTunes, Stitcher, Blubrry or Podfeed.net. We avoid tainted meat with your love and support.
Labels: Anthony Chau-Sang Wong Candice Rialson Chatterbox Ebola Syndrome Herman Yau Hotel Inferno Necrostorm Patrick Dolan Podcast Rip Taylor Rue Morgue