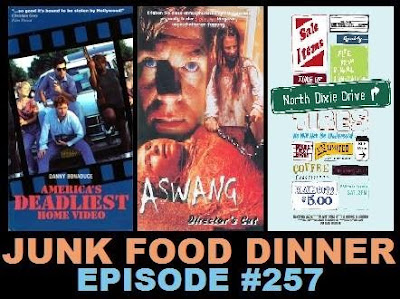 Junkies! Rejoice, for episode 257 is upon us! We are joined by Josh from Lunchmeat Magazine this week.

First, we take a look at a very early entry in the Found Footage/POV genre: "America's Deadliest Home Video" from 1993. This SOV flick stars Danny Bonaduce and Melora Walters ("Boogie Nights"). It's also directed by the dude who did "Wild Things 2," so that's pretty weird.

Next, we finally get around to a movie that's been requested by listeners for years: "Aswang" from 1994. A pregnant woman deals with weird Phillipino vampire monsters while in rural Wisconsin... for some reason. The movie turns out to be ... GROOVY.

Finally, we watch a documentary about Parker's hometown of Dayton, Ohio called "North Dixie Drive." The film looks at a part of town hit by a failing economy and an obsolete automobile industry that has since fallen into disrepair. And the eccentric folks who live there.

All this, plus Nerd News, DVDs, Mad Max Chat, Mark from Oakland's strongest "It's Okay" yet, Sweetman reflecting on Sweetman, Voicemails, skypiness, hot dogs, JFD Grandpa, a weird intro and so much more!

Got a movie suggestion for the show, want to give your opinion on a movie we talked about or just want to tell us we suck? Drop us a line atJFDPodcast@gmail.com. Or leave us a voicemail: 347-746-JUNK (5865). Also, if you like the show, please take a minute and subscribe and/or comment on us on iTunes, Stitcher, Blubrry or Podfeed.net. We'll figure out just what the hell is going on with your love and support.