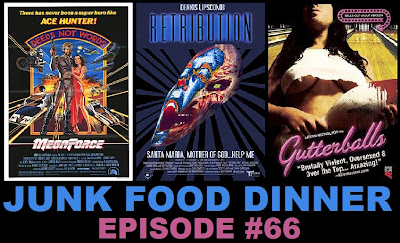 Junk Food Dinner bowls a strike this week as we take a look at three (3) films suggested by listeners.

First up, we take a look at 1982's "Megaforce," the story of Ace Hunter (Barry Bostwick) and his quest to defeat evil and ride flying motorcycles in front of green screens while wearing a headband.

Then our bodies get taken over by a murdered gangster while we watch "Retribution" from 1987. This horror flick is full of gore, glowing green eyes and the best midget cameo we've seen since last week.