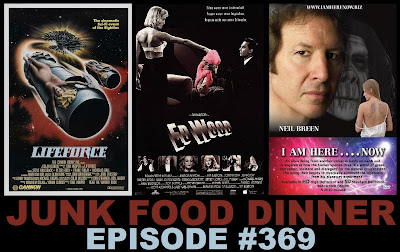 Much to Parker's delight, JFDecades is coming to a close. And we're finishing strong with three oddball flicks with an emphasis on notoriously bad directors!

Up first, a group of astronauts (including Steve Railsback of Nukie fame) find an alien ship inside the tail of Halley's Comet. They find a group of naked vampires and bring them back to their ship. But when there's an explosion on the ship killing most of the crew, only Railsback and the vampires escape, landing on Earth. Now the vampire aliens are on the loose and it's up to Railsback and a bunch of Brits to track them down before they bring on armageddon in 1985's Lifeforce, directed by Tobe Hooper (Texas Chainsaw Massacre, Poltergeist) and released by Cannon Films.

Next, Tim Burton directs a black and white biopic about one of Hollywood's most infamous "bad" directors, Ed Wood. Johnny Depp plays the titular Wood as he hustles his way through the underbelly of low budget filmmaking in the 1950's. The movie explores Wood's penchant for cross-dressing, his friendship with a near-death Bela Lugosi (played to perfection by Martin Landau) and the wacky cast of characters he assembled to produce his magna opus Plan Nine from Outer Space.

And finally, on the subject of infamous bad directors, we dissect yet another bizarre, amateurish, low-budget affair from Neil Breen, 2006's I Am Here... Now. In this outing, Breen plays a cyber Jesus who goes around punishing those who aren't living according to "his plan".

Also, if you like the show, please take a minute and subscribe and/or comment on us on iTunes and check out our new Patreon and Youtube as well. Follow us on Facebook and Twitter! We'll pick your movies with your love and support (and money).
Labels: Bill Murray ed wood I Am Here... Now JFDecades Johnny Depp Lifeforce Martin Landau neil breen Patricia Arquette Sarah Jessica Parker Steve Railsback Tobe Hooper