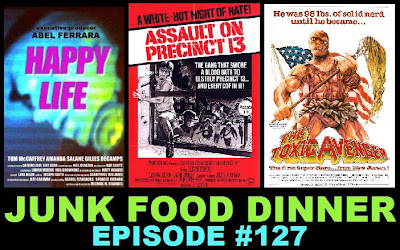 One thing's for sure: this episode isn't sissy stuff! Firstly, we talk about the fate of Kevin's band, Parker's ovaries and Mark's raver lifestyle.

Then, an aging and increasingly uncool raver throws a party to save his Manhattan record store in 2011's "Happy Life." Directed and written by Michael M. Bilandic and produced by Abel Ferrara, this is a slice of life "slacker" flick in the vein of Linklater's earlier work.

Next, a gang violently descends upon an understaffed police station in John Carpenter's "Assault on Precinct 13" from 1976. In this modern-day western, it's up to two men to hold off hordes of gang members.

Finally, a 90-pound weakling is thrown into some radioactive waste and becomes "The Toxic Avenger," in the 1984 Troma classic. Directed by Lloyd Kaufman and Michael Herz, this is the granpappy of 'em all, spawning multiple sequels, comics, video games and even a children's cartoon.