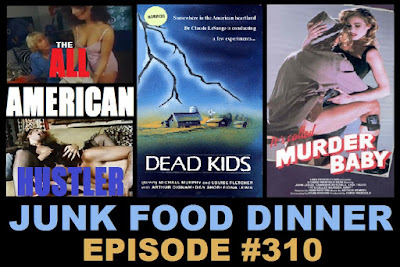 This week, Kevin's out, so in his place we welcome Joe Rubin from cult film preservation and releasing company Vinegar Syndrome to discuss three flicks currently available on their streaming service Exploitation.tv.

Next, we take a look at Dead Kids (AKA Strange Behavior) from 1981. As the title would imply, this horror mystery involves slews of youngers in a small Midwestern town getting snuffed out, but who's doing it and why?

And finally, we explore It's Called Murder, Baby (AKA Dixie Ray Hollywood Star in it's X-rated form) from 1983. This sexy, low-budget comedy thriller mixes early 80's exploitation with 50's noir.

All this plus witty banter between friends, a behind the scenes look at the acquiring and preservation of lost exploitation movies, a voicemail from The South, depressed boners, L.A. geography, continued lack of police involvement  and a whole lot more!