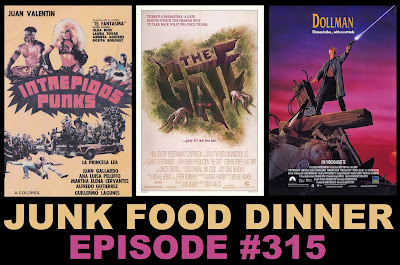 Sean's out in Korea this week, so Kevin and Parker are joined by Jackson Stewart, director of the brand new horror film Beyond the Gates! We talk to Jackson about the flick which stars Barbara Crampton (Re-Animator, You’re Next), Graham Skipper (Almost Human), Chase Williamson (John Dies at the End, The Guest) and Brea Grant (Halloween 2) in which two estranged brothers reunite sev

en months after their father’s disappearance to liquidate his anemic video store. While there, they unearth an old VCR board game that acts as an inter-dimensional hub to a nightmare world where their father’s soul is trapped and can only be saved by playing the game.

We also get a voicemail from one of the stars of the film (hint: she's a goddamn legend)!

Then we settle in to look at three pretty insane flicks;

Up first, a gang of motorcycle riding, drug taking, bank robbing Mexican punks try to evade the law while scoring more dope, money and weapons in Intrépidos Punks from 1983. The film stars lucha libre legend El Fantasma as the leader of the gang, Tarzan and features the best theme song you'll ever heard repeated 25 times in a movie!

Next, a young boy (Stephen Dorff) and his heavy metal loving friend, open a gate to Hell and unleash a bunch of weird vibes and even weirder mini monsters in 1987's The Gate.

And finally, Tim Thomerson plays a hard boiled space cop who crash lands on Earth while in pursuit of an evil villain who's just a head. The only problem is, on Earth, he's only a foot tall. Now he has to content with giant humans, the evil space head and a gang leader played by Jackie Earle Haley in Dollman from 1991.

Got a movie suggestion for the show, want to give your opinion on a movie we talked about or just want to tell us we suck? Drop us a line atJFDPodcast@gmail.com. Or leave us a voicemail: 347-746-JUNK (5865).Also, if you like the show, please take a minute and subscribe and/or comment on us on iTunes, Stitcher, Blubrry or Podfeed.net. Check us out onFacebook and Twitter! We'll play the Intrepidos Punks theme song one more time for your love and support.