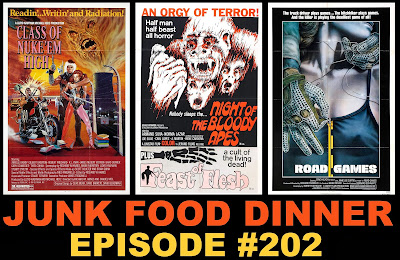 Prepare yourself for a blast of radiation, ape attacks and Aussie road rage as Junk Food Dinner returns with another episode of cult movie mayhem.

Up first, the gang travels to Tromaville to take a look at what happens when good, upstanding teens get a dose of radiation from the local nuclear power plant and as a result turn into violent, sex-crazed punks in the seminal cult flick Class of Nuke 'Em High from 1986.

Then, it's female Mexican wrestlers, mad scientists and gorilla-men in 1969's Night of the Bloody Apes. This vintage schlock-fest centers around a surgeon desperate to save his son's life by transporting the heart of an ape into his boy's body. However, when the experiment turns his son into a raping and murdering gorilla mutant, it's up to a local detective and his luchadora girlfriend to end the carnage.

Finally, we explore the Australian countryside with Stacy Keach, an American truck driver traversing the Outback. But when he inadvertently stumbles across the path of a serial killer, he and hitchhiker Jamie Lee Curtis have to stop him before he claims another helpless female victim in the 1981 Oz-ploitation thriller Road Games.

All this plus witty banter between friends, Oscar and Razzie chat, Nerd News, this week's DVD and blu-ray releases, prank calls,Godzilla rants and so much more!

Got a movie suggestion for the show, want to give your opinion on a movie we talked about or just want to tell us we suck? Drop us a line atJFDPodcast@gmail.com. Or leave us a voicemail: 347-746-JUNK (5865).Also, if you like the show, please take a minute and subscribe and/or comment on us on iTunes, Stitcher, Blubrry or Podfeed.net. We're able to populate the species with your love and support.
Labels: apes Class of Nuke 'Em High Jamie Lee Curtis luchadora Night of the Bloody Apes Podcast punks Road Games Stacy Keach Troma