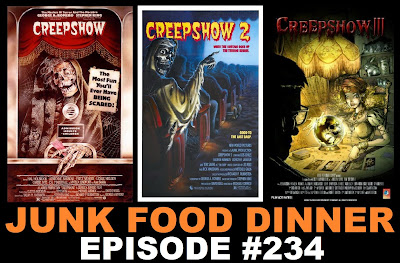 Schlocktober continues this week with our tribute to the (mostly) classic horror anthology, Creepshow!

Finally, and inexplicably, Creepshow returned (in name only) in 2006 with a new entry attempting, Creepshow 3 to cash in on the fans' love of the first two flicks. This time around we get some sub-par tales of evil remote controls, supernatural radios, killer hookers, mail order brides and haunted hot dogs. Ana Clavell and James Dudelson helm this ripoff with performances from Roy Abramsohn, AJ Bowen, Camille Lacey and Kris Allen.

All this plus witty banter between friends, Twinkie talk, a discussion on what exactly "boba" is, the formation of the JFD band The Shadmocks, nerd news about glam rock icons trying to act, smelly vinyl records, upcoming DVD and blu-ray releases, a Wesley Willis song and so much more.

Got a movie suggestion for the show, want to give your opinion on a movie we talked about or just want to tell us we suck? Drop us a line atJFDPodcast@gmail.com. Or leave us a voicemail: 347-746-JUNK (5865).Also, if you like the show, please take a minute and subscribe and/or comment on us on iTunes, Stitcher, Blubrry or Podfeed.net. We can outswim the oil slick with your love and support.
Labels: Adrienne Barbeau Creepshow Creepshow 2 Creepshow 3 Ed Harris George A. Romero George Kennedy Leslie Nielsen Schlocktober Stephen King Ted Danson Tom Atkins Tom Savini