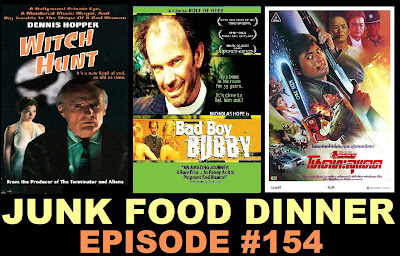 This week, we welcome our new host, Sean, with 3 weirdo flicks!

First, Dennis Hopper is a private eye in a (literally) magical '50s Hollywood in "Witch Hunt" from 1994. Paul Schrader (Hardcore, The Canyons) directs this made-for-HBO movie, co-starring Eric Bogosian as a McCarthy-esque senator and Julian Sands as a creepy German or Irish guy or something.

Then, abused and forbidden to leave his home, a man-child breaks free, in 1993's "Bad Boy Bubby." Hailed as a (cult) classic of Australian cinema, this dark and experimental film has been frequently recommended by JFD listeners.

Finally, two mismatched cops (in the the Lethal Weapon, 48 Hours vein) are on the trail of drug smugglers, in the under-the-radar (in America, anyway) Hong Kong action flick from 1988 "Tiger on the Beat," starring Chow Yun-Fat and Chia Hui Liu (Kill Bill).

All this plus witty banter between friends, complete confidentiality, no police involvement, Donald Lloyd of the Junk Food Dinner Warehouse, Junk (voice)Mails, The JFD Grandpa, and so much more!

Got a movie suggestion for the show, want to give your opinion on a movie we talked about or just want to tell us we suck? Drop us a line at JFDPodcast@gmail.com. Or leave us a voicemail: 347-746-JUNK (5865). Also, if you like the show, please take a minute and subscribe and/or comment on us on iTunes. We gain medicine for our Grandpa from your love and support.