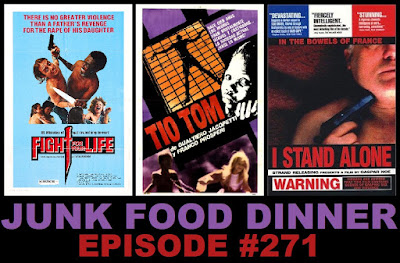 We dip another toe into the filthy waters of Ghoul Summer this week as we are joined by Cory from Illogical Contraption to take a look at three "uncomfortable" films.

Up first, William Sanderson plays a racist convict who escapes from a paddy wagon along with two other criminals and goes on the run evading the law. But when they take a black family hostage in their own home, things get ghoulish until the family fights back in the 1977 exploitation flick Fight for Your Life.

Then, a group of European filmmakers travel back in time to document the horrors of slavery in 1971's unnerving Goodbye, Uncle Tom (or Farewell, Uncle Tom) from the same people that brought you Mondo Cane.

And finally, Gaspar Noé brings us a tale of a severely disturbed French dude who in between incestuous thoughts about his daughter, gets a gun and wanders the streets of Paris plotting his final move in I Stand Alone from 1998.

Got a movie suggestion for the show, want to give your opinion on a movie we talked about or just want to tell us we suck? Drop us a line atJFDPodcast@gmail.com. Or leave us a voicemail: 347-746-JUNK (5865).Also, if you like the show, please take a minute and subscribe and/or comment on us on iTunes, Stitcher, Blubrry or Podfeed.net. We'd sword-fight just about anyone, naked and shivering in the snowfall, for your love and support.Go buy a Ghoul Summer t-shirt!
Labels: Cory Sklar Fight for Your Life Gasper Noe 420 Ghoul Summer Goodbye Uncle Tom I Stand Alone Illogical Contraption Mondo Cane