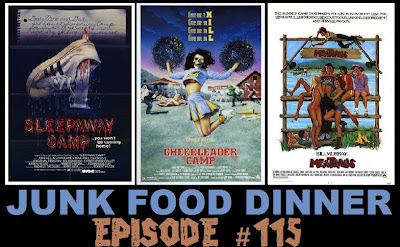 Rise and shine, everyone! It's "walking taco" day in the messhall, and Junk Food Dinner is in charge of the bonfire. Also, some of the other campers have been murdered.

First - a film that provides an impressive argument against ever braving the wilderness - Angela is having a rough time at camp this year. She's shy and hates swimming, and at camp, that's already two strikes. With no friends and only her foul-mouthed cousin Ricky to keep her company, Angela isn't really getting the most out of summer - until she meets Paul. After a series of bizarre accidents and few disappearing kids, the accusations fly and earth shattering secrets are revealed in Robert Hiltzics seminal slaherterpiece - SLEEPAWAY CAMP from 1983.

Next up - Alison and her pals are in it to win it this year at the big competition. It's hard to remember your routines when you're enveloped in a world where it's getting difficult to separate dreams from reality. When some kids go missing, Alison starts wondering if she might know more than she thinks she does. Another "blood & bugspray" cocktail but compared to SLEEPAWAY CAMP this one has way more (read: any) laughs, surreal dream sequences, and cringe-inducing rap music. We follow Betsy Russell, Leif Garrett, George "Buck" Flower, Teri Weigel, and featuring Lucinda Dickey (now with less dancing!) and more as they all pack their bags and make tracks for 1988's CHEERLEADER CAMP!

Finally - talk about a pallete cleanser - The year is 1979 and a fresh-faced Bill Murray cracks wise, pulls pranks, and makes sure camp is unforgettable for anyone who wants to cash in (or anyone who gets in his way!) The one that started it all and taught us the rich kid camp up the road didn't stand a chance - MEATBALLS from Ivan Rietman.

All this plus witty banter between friends, glitchy Skype noise, soundboard antics, Junk Mail, DVD & Blu-ray releases, Nerd News and so much more! And - an encore (you guys know about these right?)!

Also, if you like the show, please take a minute and subscribe and/or comment on us on iTunes, Stitcher, Blubrry or Podfeed.net. We gain trail mix from your love and support.
Labels: Bill Murray buck flower cheerleader camp ivan rietman leif garrett Lucinda Dickey meatballs Sleepaway Camp summer camp