JFD169: The Abomination, Kitten with a Whip, The Driller Killer! 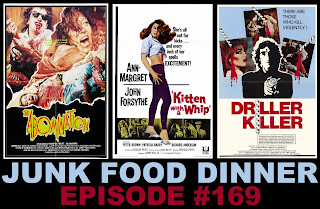 THIS PODCAST SHOULD BE PLAYED LOUD.
A miracle has befallen us this week, as the formerly deceased Mark Freado Jr. has rejoined the podcast for a week (sans Parker). And boy do we have a doozy of a line-up for his glorious return: THE ABOMINATION (1986), KITTEN WITH A WHIP (1964), and THE DRILLER KILLER (1979)! In order to achieve the maximum Freado effect, we suggest recording this episode to cassette tape before listening to it.
First up, we face the absolute desolation brought upon us by THE ABOMINATION (1986), directed by independent Texan filmmaker Bret McCormick. Awkwardly badass mulleted nerdy dude Cody ends up with more than he bargained for when faced with the prospect of continually feeding live humans to The Abomination, a demon creature that hangs out in his kitchen cupboard after being transformed from a tumor his mother coughed up one night that then crawled into Cody's mouth. Sounds simple, right? It's a wild one.
Next on the show, we tell all the creeps to cool it and to coexist, as we check out KITTEN WITH A WHIP (1964), starring the lovely Ann Margret. Featuring a home invasion and blackmail scheme by some pesky beatniks, you might say it's the cat's meow, or something.
Finally, we pay tribute to Mark's adopted hometown of NYC with Abel Ferrara's directorial debut, THE DRILLER KILLER (1979). Gritty New York street scenes combined with super-bloody head-drilling scenes adds up to an entertaining splatfest, and maybe even something more.
All this plus Nerd News, DVD releases, your Junk Mail, Parker Predictions, no police involvement, confidentiality compromised by NSA, power tools, and cool daddy-o's.

Direct Donloyd Here
Got a movie suggestion for the show, want to give your opinion on a movie we talked about or just want to tell us we suck? Drop us a line at JFDPodcast@gmail.com. Or leave us a voicemail: 347-746-JUNK (5865).
Also, if you like the show, please take a minute and subscribe and/or comment on us on iTunes, Stitcher, Blubrry or Podfeed.net. We gain free porto-packs from your love and support.