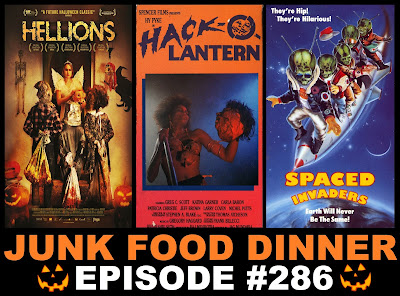 Up first, a teenage girl (Chloe Rose from Degrassi) finds out she is pregnant on Halloween, but as she figures out how to tell her boyfriend, she is visited by some trick-r-treaters who don't want candy, they want her baby. As things become more intense and more psychedelic, Robert Patrick (the T-1000 himself) shows up to help battle terrifying tikes in Hellions from 2015 directed Bruce McDonald (Pontypool, Hardcore Logo).

Next, a teenage boy is introduced to the powers of Satanism by his goofy grandpa (Hy Pyke from Slithis) and on Halloween night things really get crazy as murder, mayhem and hair metal ensues in the video store favorite Hack-O-Lantern (AKA Halloween Night) from 1988.

And finally, when a group of dimwitted Martians hear a radio broadcast of Orson Welles' War of the Worlds, they mistakenly think that they are missing out on the invasion. But when they show up all they find are goofy Midwesterners celebrating Halloween in the kiddy special effects romp Spaced Invaders from 1990, featuring Ariana Richards (Jurassic Park) and Royal Dano (Killer Klowns, Ghoulies II).

All this plus witty banter between creepy friends, a full Corn Gorn run-down, Spooky Nerd News, blu-rays from beyond the grave, Snax Chat, a call from the Governator, Trippy Sweetman, songs about Halloween, absolute confidentiality (if you're wearing a mask), continued lack of overt police involvement (unless you soap our windows) and a whole lot more!

Got a movie suggestion for the show, want to give your opinion on a movie we talked about or just want to tell us we suck? Drop us a line atJFDPodcast@gmail.com. Or leave us a voicemail: 347-746-JUNK (5865).Also, if you like the show, please take a minute and subscribe and/or comment on us on iTunes, Stitcher, Blubrry or Podfeed.net. Check us out onFacebook and Twitter! Your love and support is all treat, no tricks.
Labels: Bruce McDonald Hack-O-Lantern Halloween Halloween Night Hellions Hy Pyke Robert Patrick Royal Dano Schlocktober Spaced Invaders