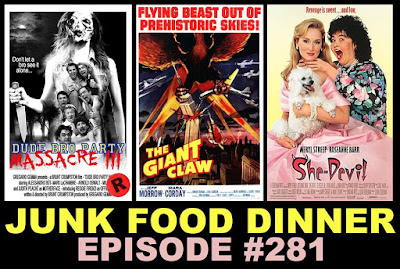 Junk Food Dinner's back and things are gonna get schwifty.

First, a group of frat bros deal with a slasher in the 2015 fake 80s movie "Dude Bro Party Massacre 3." Made by the guys behind 5 Second Movies, this movie flips the gender switch and has a female stalker slash up a bunch of frat bros in emulated 80s fashion.

Next, an extra terrestrial kaiju bird made of anti-matter attacks New York in 1957's "The Giant Claw." The flick is remembered for its horrible bird creature. But should it be remembered for more?

Finally, Roseanne Barr plots revenge on her husband and his mistress in 1989's "She Devil." Roseanne's husband, Ed Begley Jr, meets Meryl Streep at a party and they fall in love. So, Roseanne becomes the Punisher. But if gangsters were people who had fallen out of love.

All this, plus work chat, controversial opinions, DVDS, Blu Rays, Memphis Maniacs and one of your hosts reaches the breaking point.

Schlocktober kicks off next week, so let's get spoopy! Until then, Hide the Bodies are printing a second round of Ghoul Summer shirts, so go buy them Here!