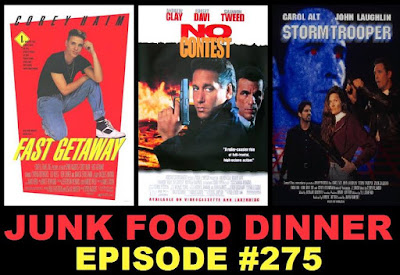 First, Corey Haim and his dad are bank robbers in 1991's "Fast Getaway." When his dad's girlfriend, Cynthia Rothrock, double-crosses them, the boys decide to visit the Grand Canyon and consider leaving bank robbing behind for good. But does Haim have any sex and get the feelings? Tune in.

Next, only Shannon Tweed can save a group of beauty pageant contestants from killers in "No Contest" from 1995. This Die Hard rip off stars Andrew "Dice" Clay and "Rowdy" Roddy Piper (RIP) as terrorists.

Finally, Carol Alt and a mysterious stranger are besieged by army dudes in "Storm Trooper" from 1998. Legendary director Jim Wynorski brings us this tale of super soldiers, domestic abuse and Corey Feldman wearing an eye patch.

Remember, Ghoul Summer T-Shirts and beer koozies are still available on our website, or through Hide The Bodies on etsy!