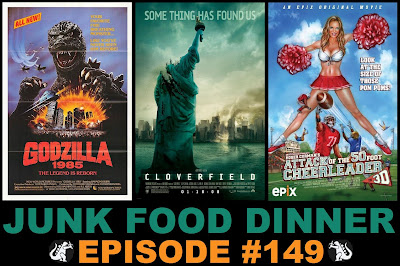 Tonight we've got a really big show! Get it? It's a pun! We're doing three movies about giant monsters!

First and foremost, the king of the monsters returns to wreak havoc on Japan in Godzilla: 1985. After many years without Godzilla, (in both the story and in real life), the monster returns, threatening Japan with its destructive power, and by causing worldwide nuclear tensions.

Next, a giant beast rises from the sea in time to crash a party in 2008's Cloverfield. Directed by Matt Reeves (Let Me In) and written by Drew Goddard (Cabin in the Woods), this is a smart, modern (found footage) take on giant monsters.

All this plus witty banter between friends, complete confidentiality, no police involvement, soundboard antics, Donald Lloyd of the Junk Food Dinner Warehouse, Junk (voice)Mails, DVD & Blu-ray releases, Nerd News and so much more!

Also, if you like the show, please take a minute and subscribe and/or comment on us on iTunes. We gain dead chickens from your love and support.