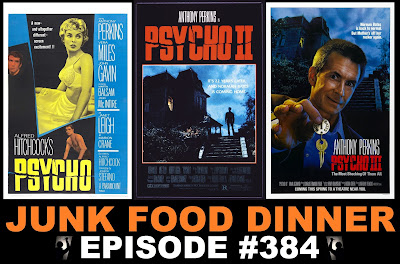 It's the greatest time of year; Schlocktober is upon us and we kick off this year's festivities by bringing on Jackson Stewart, director of Beyond the Gates, to discuss 3 flicks about Norman Bates and his mommy issues.

Up first, we examine the original black and white Alfred Hitchcock  classic, where Janet Leigh checks into an off-the-beaten-path motel after stealing $40,000 from her job only to fall victim to the motel's proprietor Norman Bates, played by Anthony Perkins. This bonafide masterpiece ushered  in a new era of slashers. Get ready for the shower scene, kids, it's Psycho from 1960.

Next, 23 years later, after Hitchcock had died, Universal revived the series exploring the further misadventures of Norman Bates after he is released from prison and returns to his infamous motel only to have his murderous urges return in Psycho II from 1983.

And finally, Anthony Perkins expands his role, now acting as director and star of Psycho III from 1986. This time Norman is back to his old tricks after a drifter played by Jeff Fahey comes to work at the Bates Motel and young women start to end up dead.

All this plus witty banter between friends, more Mother! chat, is Parker becoming a grandpa?, Psycho songs, our world famous weekly Nerd News and Blu-ray Picks, continued lack of overt police involvement, and a whole lot more!

Also, if you like the show, please take a minute and subscribe and/or comment on us on iTunes and check out our new Patreon and Youtube as well. Follow us on Facebook and Twitter! We'll pick your movies with your love and support (and money).
Labels: alfred hitchcock Anthony Perkins janet leigh Jeff Fahey Meg Tilly Norman Bates Podcast Psycho Psycho II Psycho III Schlocktober