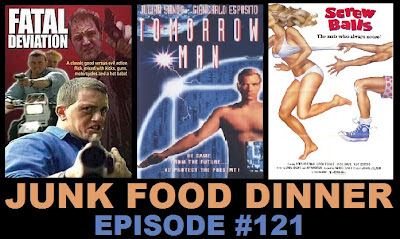 With all traces of Ghoul Summer leaving our bodies, JFD returns with a kinder, gentler podcast experience for you and yours.

Up first, it's a whirlwind of fists, squibs, misguided musical choices, and thick accents as we take a look at the first martial arts film from the Emerald Isle - 1998's SOV arse-kicker FATAL DEVIATION. When a young man returns from reform school to avenge the death of his father, he's entered into a tournament and forced to fight to the death. Can he be the champion and still find time to save the damsel in distress, rebuild his home, beat up almost everyone in town, and participate in a seemingly endless training montage? (Spoiler: Yes, he can.)

Next, we dip back in the Julian Sands well and come up with a bucket of mid-90's made for TV sci-fi in the form of THE TOMORROW MAN. Sands plays a robot, named Ken (!!!!!!!), sent from the future to save the past. He teams up with the man who essentially created him (played by Giancarlo Esposito) to stop the bad guys and learn a thing or two about what it means to truly be human. A cast of some quality character actors and the sweet kiss of CGI shapeshifting from 1996 make for a surprisingly entertaining watch.

Finally, if it ain't broke don't fix it. It's one of the finest sex comedies to ever grace (or maybe grease?) the screen. 1983's SCREWBALLS sets the bar pretty high for some low-brow laughs. Five unlikely friends make a pact to get even with the popular prude who got them all thrown in detention. It's time to put their heads together and come up with a list of schemes so crazy - they just might work. Turn your brain off and we'll see you after class.

Also, if you like the show, please take a minute and subscribe and/or comment on us on iTunes, Stitcher, Blubrry or Podfeed.net. We gain a genuine sense of human emotions from your love and support.
Labels: Clue Jr Fatal Deviation Giancarlo Esposito Jim Wynorski Julian Sands Screwballs The Tomorrow Man