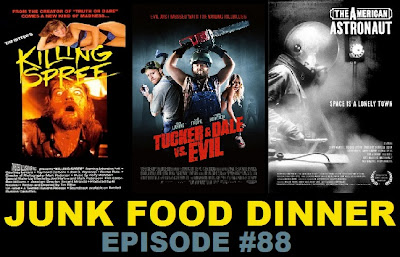 Up first, a man with a crazy blond beard and a wild-eyed stare (the incomparable Asbestos Felt) suspects his wife (Courtney Lercara) is being unfaithful after reading her salacious diary entries and unleashes a reign of terror on those who would threaten his marriage in the low-budget 1987 gore fest, Killing Spree, directed by Tim Ritter of Truth or Dare: A Critical Madness fame.

Then, two lovable hillbillies (Tyler Labine and Alan Tudyk) head out to their new vacation home, a rustic cabin in the woods, for some quality bro time. But when a group of spoiled college kids (including the lovely Katrina Bowden and the hilariously sinister Jesse Moss) mistake their backwoods ways for evil intent, it kicks off a series of misunderstandings and spark a chain of events that leaves a high body (and laugh) count in the 2010 horror/comedy Tucker & Dale vs. Evil.

And finally, music, absurd comedy and beautiful black and white cinematography collide in a story about an intergalactic trader (Cory McAbee, who also wrote, directed and scored the film) who's on a mission to deliver The Boy Who Actually Saw a Woman's Breast to Venus, all while trying to avoid being turned to dust by the ray-gun of the evil Professor Hess (Rocco Sisto) in The American Astronaut from 2001.

All this plus witty banter between friends, rock 'n roll music, glitchy Skype noise, Nerd News, DVD & Blu-ray releases, and so much more!