JFD132: The Howling, An American Werewolf in Paris, Silver Bullet 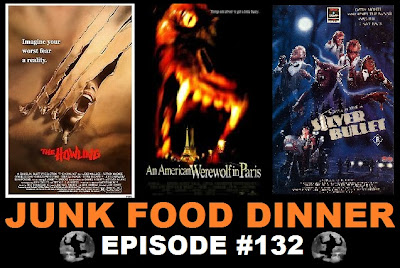 Aawhooooooo! It's the fourth week of Schlocktober and this week the boys are joined by special guest host Katie Rots from the excellent Rotten Rantings podcast to howl at the moon and discuss three unique werewolf films.

Up first, under appreciated scream queen Dee Wallace plays Karen White, a reporter who, after a traumatizing encounter with a local serial killer is sent to new age rehabilitation retreat with her husband to help get over the event. But soon it is discovered that the serial killer and the folks at the retreat are not what they seem as things take a wolfish turn in the 1981 horror film The Howling, directed by Joe Dante.

Then, Andy McDermott (Tom Everett Scott) and his two daredevil buddies (Vince Vieluf and Phil Buckman) are vacationing in Paris. But after Andy saves a young woman's life (Julie Delpy) and subsequently falls in love with her, the Americans are sucked into an underground cult of werewolves, in the much-lauded 1997 follow-up to An American Werewolf in London, An American Werewolf in Paris.

And finally, Gary Busey plays drunken uncle to a wheelchair-bound Corey Haim. Life is good in their small town until people start dying mysteriously left and right. The Haimster discovers not only who the murderer is, but also his wolfen secret, it's up to him and his uncle to bring an end to the carnage in 1985's Silver Bullet.