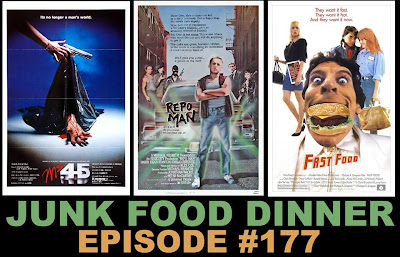 This week, we're joined by our podcat bros, The Badland Girls!!

Rhea and Destiny bring us a tale of vigilantism and revenge on the male species in Abel Ferrara's "Ms. 45." In this 1981 flick, Thana is a girl in New York who has a bad day when she's assaulted and raped. But this leads her to indiscriminately start killing off anyone she sees with a penis. And maybe dogs, too.

Next, Emelio Estevez is an angry young punk in LA who gets a job repossessing cars in 1984's classic "Repo Man." Directed by Alex Cox and co-starring Harry Dean Stanton, this is a tale of aliens, consumerism and The Circle Jerks.

Please take a second to like us on Facebook or rate/review us on iTunes because that's the coal that makes this steamship keep floatin'.