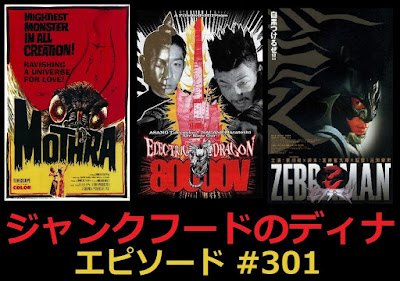 As we work off the hangover, clean off our tuxes and sweep up the confetti from our 300th episode award ceremony, we take some time to keep Sci Fi-ebruary rolling along by exploring three Japanese sci-fi films.

First, we examine a true classic of Japanese kaijū cinema, Mothra from 1961. Directed by Ishirô Honda (Godzilla, Matango, Frankenstein Conquers the World and countless other kaijū classics) this is a tale of two twin fairies who are kidnapped from their island home and made to perform for the people of Japan. However, their protector, Mothra, a giant moth, comes to rescue them leaving nothing but carnage in its path.

Next, we get an electrifying jolt of manic black & white cinema, abrasive Japanese noise rock and battles for spiritual supremacy in Electric Dragon 80.000 V from 2001. Director Gakuryû Ishii (who gave us 1982's Burst City) tells the story of a young man who gains special powers from electricity and uses them to rock out and catch lizards until one day he is challenged by another man who knows how to harness the voltage as well.

Finally, we get to see a softer side of Takashi Miike (Audition, Ichi the Killer) with his 2004 superhero comedy Zebraman. In this film, Shô Aikawa plays a schlubby teacher who gets no respect from his family or students. He fantasizes about becoming his favorite superhero from the 70's, Zebraman, until one day, he and a wheelchair-bound student discover that the events of the Zebraman TV show are actually starting to happen in the real world and it's up to them to be heroes.

All this, plus Super Bowl movie trailer roundup, Civil War comic books, calls from Australia, Matthew Sweetman, Nerd News, DVDs and blu-rays of the week, questionable English dubbing, the gender politics of giant monsters, Japanese rock songs, cosplaying as a crab on the streets of Tokyo, and so much more!

Got a movie suggestion for the show, want to give your opinion on a movie we talked about or just want to tell us we suck? Drop us a line atJFDPodcast@gmail.com. Or leave us a voicemail: 347-746-JUNK (5865).
Also, if you like the show, please take a minute and subscribe and/or comment on us on iTunes, Stitcher, Blubrry or Podfeed.net. Check us out onFacebook and Twitter! We'll survive a giant monster invasion with your love and support.