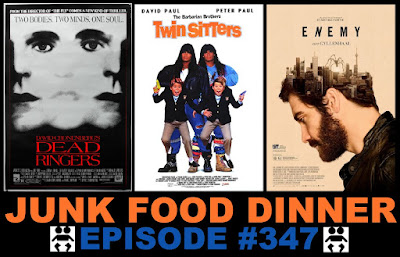 JFD returns with a brand new episode dedicated to the identical siblings that make life so interesting, twins!

Up first, David Cronenberg brings us a tale of twin gynecologist brothers, both played by Jeremy Irons, who share everything; their swanky apartment, their career and even their women. When one of them falls for a mature actress played by Geneviève Bujold, their perfect world begins to fall apart, and as you'd expect from Cronenberg, things get weird in Dead Ringers from 1988.

Then, we revisit the Barbarian Brothers (Peter and David Paul), the twin body builders who ham it up in the dopey kids' flick Twin Sitters from 1994. John Paragon (Pee-Wee's Playhouse) directs this goofy comedy about a pair of muscle-bound losers who are hired by a millionaire to protect his twin nephews from George Lazenby and his henchmen who are out to get them.

And finally, Jake Gyllenhaal plays a college professor who spots his doppelganger in a movie and becomes obsessed with finding him and figuring out what the hell is going on and even gets involved in some "spider play" in Enemy from 2013.

All this plus witty banter between friends, La La Land love, Chucky's back, a classic comes to blu-ray, Jackie Chan's Bollywood adventure, euphemisms for squeezing one out, Blu-ray Picks, songs about twins, continued lack of overt police involvement, and a whole lot more!


Got a movie suggestion for the show, want to give your opinion on a movie we talked about or just want to tell us we suck? Drop us a line atJFDPodcast@gmail.com. Or leave us a voicemail: 347-746-JUNK (5865).
Also, if you like the show, please take a minute and subscribe and/or comment on us on iTunes, Stitcher, Blubrry or Podfeed.net. Check us out onFacebook and Twitter! We'll finally separate from our Siamese twin with your love and support.