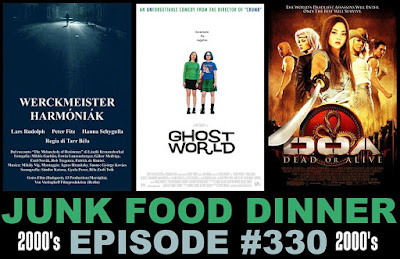 First, controversy in the JFD offices as we watch "Werckmeister Harmonies," a 2 1/2 Hungarian film about a dead whale and the village people who ponder it.

Next, Thora Birch and Steve Buscemi star in the adaptation of the Daniel Clowes comic, "Ghost World." Birch plays Enid, a young woman just out of high school who's trying to find out if there's more to life than irony.

Finally, a movie that can only be liked somewhat ironically, "DOA: Dead or Alive." It's a fighting tournament with foxy bikini beach girls!

All this plus Parker tells the real truth about Gene Wilder, Godzilla Chat, Our favorite Hardcore Champions, DVDs, Nerd News, The Fighting Attorney, no voicemails and so much more!


Donloyd Here! Got a movie suggestion for the show, want to give your opinion on a movie we talked about or just want to tell us we suck? Drop us a line at JFDPodcast@gmail.com. Or leave us a voicemail: 347-746-JUNK (5865).