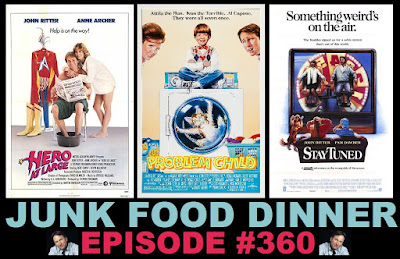 Come and knock on our door, junkies, as we celebrate the life and career of one of the most likable dudes ever, John Ritter as we explore some of his goofy flicks.

Up first, Ritter plays a struggling actor in New York City who moonlights cosplaying as a superhero to help promote a new movie based on the character, but when he stops a robbery of a bodega in costume, the city gets Captain Avenger fever and Ritter has to decide if he wants to continue the superhero act in Hero at Large from 1980.

Then, John Ritter and Amy Yasbeck play a childless couple who can't have kids but when they decide to adopt they get more than they bargained for when their adopted child turns out to be sadistic bastard in 1990's Problem Child.

And finally, John Ritter plays a TV-obsessed husband and father who gets himself and his wife sucked into a hellish TV world filled with unholy parodies of pop culture when he purchases a TV off a minion of Satan himself (Jeffrey Jones) in Stay Tuned from 1992.


Got a movie suggestion for the show, want to give your opinion on a movie we talked about or just want to tell us we suck? Drop us a line atJFDPodcast@gmail.com. Or leave us a voicemail: 347-746-JUNK (5865).
Also, if you like the show, please take a minute and subscribe and/or comment on us on iTunes and check out our new Patreon and Youtube as well. Follow us on Facebook and Twitter! We'll prat fall over the couch with your love and support.
Labels: Amy Yasbeck Anne Archer Dennis Dugan Hero at Large Jack Warden John Ritter Michael Richards Pam Dawber Problem Child Stay Tuned