JFD173: Deadly Prey, Missing in Action, Dark of the Sun 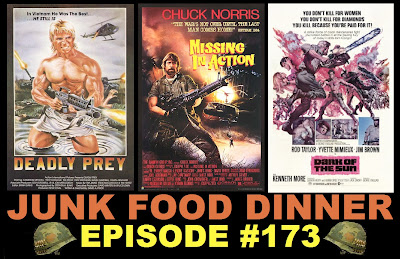 At ease, soldier! Get ready for guns, muscles and explosions as we kick off Shock & Awe-gust, our month-long salute to the craziest action flicks ever with a balls-to-the-wall WAR/COMBAT-themed show!

Up first, what happens when a covert mercenary training camp kidnaps people to hunt for practice, only to accidentally capture an elite, specially trained killing machine in the form of Ted Prior? Well, if you've seen any adaptation of The Most Dangerous Game, you probably have a good idea. But nevertheless, we revel in the ridiculous over-the-top action that is David A Prior's Deadly Prey from 1987.

Then, Chuck Norris is a Vietnam veteran who won't rest until all of his war buddies, who are still prisoners of war in 'Nam, are freed. So, before you can say "revisionist history", Chuck and his pal M. Emmet Walsh are tearing through the Vietnamese jungle killing everything in sight in the1984 Cannon Films action flick Missing in Action directed by Joseph Zito.

And finally, Rod Taylor is a mercenary hired to rescue a group of Europeans, not to mention a shitload of diamonds, from the African Congo along with his team, a drunk, an ex-Nazi, a young Jim Brown and the beautiful Yvette Mimieux. Along the way there is a lot of gun battles, a chainsaw fight(!), train explosions and good old fashion hand-to-hand combat in 1968's Dark of the Sun directed by Jack Cardiff.

All this plus witty banter between friends, Nerd News, this week's DVD & blu-ray releases, complete confidentiality, no police involvement, a chance to win a Parker doll, classic punk rock, rear projection, Junk (voice)Mail, and so much more!
LISTEN NOW:
MP3 Direct Donloyd
Got a movie suggestion for the show, want to give your opinion on a movie we talked about or just want to tell us we suck? Drop us a line at JFDPodcast@gmail.com. Or leave us a voicemail: 347-746-JUNK (5865).

Also, if you like the show, please take a minute and subscribe and/or comment on us on iTunes, Stitcher, Blubrry or Podfeed.net. We gain tons of ammo from your love and support.
Labels: Chuck Norris Dark of the Sun David A. Prior Deadly Prey Jack Cardiff Jim Brown Joseph Zito M. Emmet Walsh Missing in Action Podcast Rod Taylor shock and awegust Ted Prior Vietnam war Yvette Mimieux