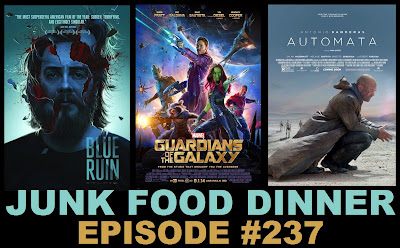 Welp, Halloween season's over, butthorns, and as 2014 starts winding down JFD calls upon foundingmember Mark Freado Jr to join us to examine some flicks from the past year.

Up first, up-and-coming direct Jeremy Saulnier weaves a tale about a Virginia man, Dwight (Macon Blair), who has become a vagrant after the murder of his parents. But when he gets the news that the man responsible for their deaths is released from prison, Dwight goes into full revenge mode in Blue Ruin.

Then, it's not often that JFD tackles one of the biggest films of the year, but in the case of Guardians of the Galaxy, it was too good to be ignored. Director James Gunn (Slither, Super) brings a culty vibe to this comic book tale about a space loser (Chris Pratt) and his gang of misfits who are trying to transport a valuable orb across the cosmos.

Finally, Spanish director Gabe Ibáñez mixes a bit of Blade Runner and a dash of District 9, to create a futuristic tale where where the human population has dwindled and relies on robots to do the work once done by humans. But when Antonio Banderas discovers that the robots may be self-aware, he goes on a quest to protect mankind in Autómata.

Got a movie suggestion for the show, want to give your opinion on a movie we talked about or just want to tell us we suck? Drop us a line atJFDPodcast@gmail.com. Or leave us a voicemail: 347-746-JUNK (5865).Also, if you like the show, please take a minute and subscribe and/or comment on us on iTunes, Stitcher, Blubrry or Podfeed.net. We get our coffe with low milk and of course, your love and support.
Labels: Antonio Banderas Autómata Blue Ruin Bradley Cooper Chris Pratt Dave Bautista Gabe Ibáñez Guardians of the Galaxy James Gunn Melanie Griffith Podcast Vin Diesel Zoe Saldana