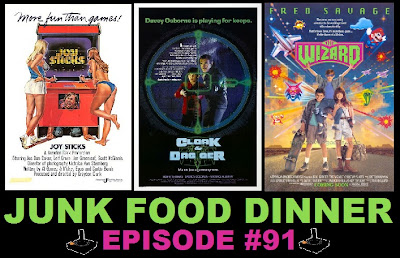 As if a podcast dedicated to cult movies wasn't nerdy enough, this week we delve into another geek pursuit; VIDEO GAMES, when we take a look at three retro gaming-themed flicks.

Up first, we travel back to a magical, fantasy world where playing video games could potentially win you the affection of scantily clad babes. It's the early 80's and video arcades are all the rage. Geeks, dweebs, fatsos, leather-clad punk rockers and fly honeys are all flocking to Bailey's Arcade and having the time of their lives playing Pac-Man, Joust, Defender and Satan's Hollow. That is, until Joe Don Baker and his cronies set out to spoil everybody's good time in the 1983 sex comedy Joysticks.

Then, a young boy (ET's Henry Thomas) obsessed with spy fantasies comes face to face with the real McCoy when he witnesses a secret agent murdered by evil spies. But before the agent bites the dust, he gives the boy an Atari cartridge filled with top secret information. Now the boy is on the run and must rely on the help of his imaginary friend Jack Flack (Dabney Coleman), his real friend Kim and his dad (also Coleman) to bring down the the evil super spy Rice (Michael Murphy) who is after him in the surprisingly violent kids' movie Cloak & Dagger from 1984.

And finally, Fred Savage'll be damned if he sees his mildly autistic brother Jimmy put in a home. His solution? Run away to California! But along the way he teams up with Jenny Lewis and realizes his brother kicks major butt at Nintendo games. With their parents, bounty hunters and bratty video aces on their tale the three kids make their way to the video game championships in the late 80's nostalgia-dripping, 90 minute Nintendo commercial The Wizard from 1989.

All this plus witty banter between friends, rock 'n roll music, glitchy Skype noise, Nerd News, DVD & Blu-ray releases, and so much more!