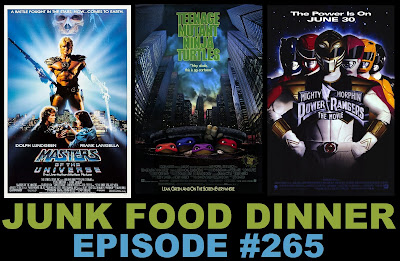 Yeah, yeah, we know the internet is filled to the fuckin' brim with dudes in their 30's waxing nostalgic about the goofy shit they loved when they were children, but that's not going to stop us from dedicating an entire episode to movies based on classic kids franchises from the 80's and 90's. Because, let's face it, despite their popularity these flicks are just as weird as many of the underground cult flicks we discuss normally.

Up first, we take a look at Masters of the Universe from 1987. Cult film stalwarts Cannon Films obtained the rights to this massively popular toy line and sunk a shit-load of money into its big screen adaptation. However, strange deviations from the source material, wooden performances from Dolph Lundgren and Courteney Cox and an all around silly plot left a lot of kids dissapointed. Does it hold up on its own merits nearly 30 years later? Listen to find out.

Next, there's probably not a single person listening to this episode who wasn't geeked as fuck when the omnipresent cultural icons Teenage Mutant Ninja Turtles made their live-action big screen debut in 1990. With costumes by Jim Henson and more catch phrases than you can shake a piece of pizza at, this movie was every kid's wet dream come true. And it has Corey Feldman in it!

And finally, while it was a little after our time, many listeners slightly younger than us likely hold Mighty Morphin Power Rangers: The Movie from 1995 in the same nostalgic regard as the other two films. This one concerns a group of teens who have supernatural powers that they use to defeat an evil, wise-cracking entity that this threatening to destroy their leader and brainwash all the adults in town.

Got a movie suggestion for the show, want to give your opinion on a movie we talked about or just want to tell us we suck? Drop us a line atJFDPodcast@gmail.com. Or leave us a voicemail: 347-746-JUNK (5865).Also, if you like the show, please take a minute and subscribe and/or comment on us on iTunes, Stitcher, Blubrry or Podfeed.net. We can defeat Skeletor, Shredder and Ivan Ooze with your love and support.