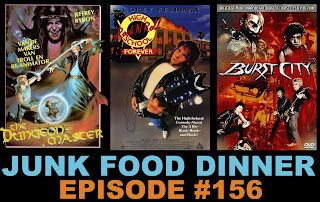 Dance around the refrigerator with your Junk Food Dinner pals as we discuss everything from laser-blasting computer nerds to drag-racing Japanese punks!

First, computer nerd Jeffrey Byron shoots lasers at The Devil (Richard Moll) and chases after midget barbarians in attempt to save his girlfriend in 1984's The Dungeonmaster aka Ragewar.

Finally, a band of Japanese punk rockers protest the construction of a power plant in a dystopian future in between drag races and live shows in 1982's Burst City.

All this plus witty banter between friends, Nerd News, this week's DVD & blu-ray releases, complete confidentiality, no police involvement, death by fire, no Ramones, Donald Lloyd of the Junk Food Dinner Warehouse, Junk (voice)Mails, and so much more!

Also, if you like the show, please take a minute and subscribe and/or comment on us on iTunes, Stitcher, Blubrry or Podfeed.net. It's the only way to protect us from Mestema!