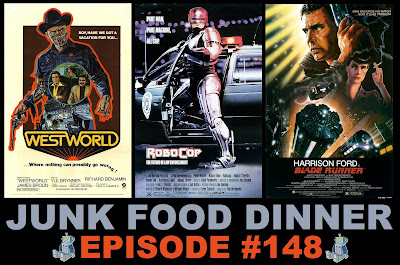 We're on the homestretch of Sci Fi Ebruary with this week's robot theme show!

First, an amusement park full of androids experiences technical difficulties in 1973's "Westworld." Written and directed by Michael Crichton, this flick features Yul Brynner in his iconic, frightening and influential role as The Gunslinger.

Next, After his gruesome death, Officer Murphy (Peter Weller) is brought back to to clean up Detroit in RoboCop from 1987. Paul Veerhoeven (Total Recall, Starship Troopers) directs this masterpiece of violent satire.

Finally, it's up to Harrison Ford to hunt down escaped robots in Ridley Scott's Blade Runner from 1982. Rutger Hauer and Daryl Hannah co-star in this stylish sci fi benchmark.

All this plus witty banter between friends, soundboard antics, facetoface Chat, Junk (voice)Mails, DVD & Blu-ray releases, Nerd News and so much more!

Also, if you like the show, please take a minute and subscribe and/or comment on us on iTunes. We gain dead chickens from your love and support.