JFD381: Village of the Giants, Blood Games, The Real Cancun 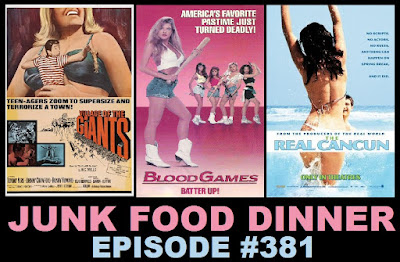 Break out your bikinis because JFD is closing out summer with a killer party featuring giant juvenile delinquents, baseball babes and drunk co-eds. Plus, we're joined by O.G. JFD host Mark Freado to enhance the festivities.

Up first, a group of rowdy teens (including a young Beau Bridges) get ahold of a magic goo that little Ronny Howard makes in his science lab that turns living creatures super sized. When they eat the goo they turn into humongous party animals that just want to dance in Bert I. Gordon's Village of the Giants from 1965.

Then, a traveling female baseball team runs a-foul (get it?) of a gang of hillbillies in the back woods of the South. After the ladies beat the hicks in baseball and take their money, the good ol' boys try to get revenge in some grisly ways, but these baseball babes fight back in Blood Games from 1990.

And finally, the people that brought you The Real World try to bring that reality charm to the big screen by making a pseudo-documentary about a group of college kids getting drunk and hooking up in Mexico in The Real Cancun from 2003.

All this plus witty banter between friends, what Freado's been up to, bitchin' about It, tips for theaters and studios on how not to suck, Twitter fights with The New York Times, our world famous weekly Nerd News and Blu-ray Picks, continued lack of overt police involvement, and a whole lot more!

Also, if you like the show, please take a minute and subscribe and/or comment on us on iTunes and check out our new Patreon and Youtube as well. Follow us on Facebook and Twitter! We'll pick your movies with your love and support (and money).
Labels: Beau Bridges Bert I. Gordon Blood Games mark freado Podcast Ron Howard The Real Cancun Village of the Giants