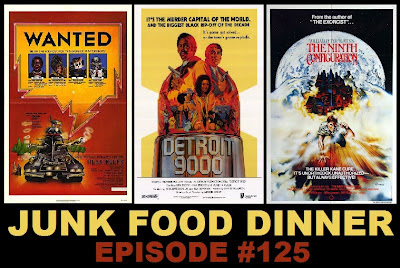 We're a family again! Junk Food Dinner returns, stronger than ever before.*

Up first it's the touching story of robots in love. Andy Kaufman and Bernadette Peters star in the effects laden misstep HEARTBEEPS from 1981.

Next, the year is 1976 and we're hitting the streets of the Motor City and get caught in the middle of a race war with a killer soundtrack and Scatman Crothers! DETROIT 9000!

Finally, we get sidetracked on our way to the moon and end up in a mental asylum alongside Stacy Keach among others. It's William Peter Blatty's THE NINTH CONFIGURATION from 1980!

All this plus witty banter between friends, glitchy Skype noise, soundboard antics, laffs at the expensive of dead celebrities, Junk Mail, DVD & Blu-ray releases, Nerd News and so much more!
Direct Download Here

Also, if you like the show, please take a minute and subscribe and/or comment on us on iTunes, Stitcher, Blubrry or Podfeed.net. We gain product placement deals with Pepsi from your love and support.