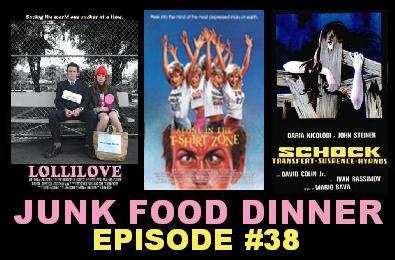 On this week's episode of Junk Food Dinner, we discuss three hootenannys of cinema.

First up, we've got 2004's "Lollilove." Released by Troma, this mockumentary starring Jenna Fischer from "The Office" (who also directed) and her then-husband James Gunn ("Slither," "Dawn of the Dead") features a wealthy young couple who set out to cure homelessness via lollipops. The film features cameos by Lloyd Kaufman, Judy Greer and more!

Then we've got "Alone in the T-Shirt Zone." The 1986 comedy/drama centers around a young T-shirt artist named Mike and the horrors of his mundane existence. This experimental flick was directed by Mike B. Anderson who would go on to direct "The Simpsons."

Finally, we look at Italian horror master Mario Bava's final film "Shock" (aka "Beyond the Door 2") from 1977. The film features a possessed kid, a widowed woman and a vengeful Slinky.