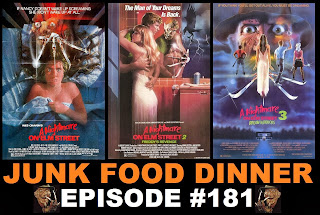 Our annual tradition of Schlocktober has returned, and it kicks off this week with a Freddy fanatic's dream show, as we dive into the first three movies in the legendary A Nightmare on Elm Street series!

We start, of course, where it all began with 1984's A NIGHTMARE ON ELM STREET! Directed by Wes Craven, this landmark slasher introduced horror fans the world over to the man of their dreams, Freddy Krueger. Imaginative death sequence set pieces, a fantastic performance by Robert Englund, and surreal nightmare sequences are remembered fondly, but can the curse of silly endings and hammy acting ruin our nostalgia? The only way to know is to listen, and the only way to listen is with your ears.

Next, we take a closer look at the least fondly remembered of all the Nightmare sequels, 1985's A NIGHTMARE ON ELM STREET PART 2: FREDDY'S REVENGE. Oddly pervasive homoeroticism combine with a different take on the Freddy mythos that is more possession-based than nightmare-based, this entry sticks out like a sore thumb, and not only for its day-glo neon visuals. We try to decipher the meaning of the exploding parakeet in one of this film's more memorable sequences, and in the process, we learn a thing or two about ourselves.

The first week of Schlocktober comes to and end with our examination of 1987's A NIGHTMARE ON ELM STREET 3: DREAM WARRIORS! When troubled teen Kristen Parker (Patricia Arquette) is sent to a psychiatric hospital for youths, she is surprised to find the other kids are experiencing the same dreams of Freddy Krueger. She's even more surprised to discover that new hospital staff member Nancy Thompson (Heather Langenkamp) knows the dark secret behind their dreams. We delight in all of the kid-bonding and suicide-influenced imaginatively-gory kill sequences as the kids bond together to become the Dream Warriors! Oh, and did we mention that this is a Craig Wasson Jam?

All this plus witty banter between friends, extremely clean Skype qualities, Freddy News, this week's DVD + blu-ray releases, tennis balls aplenty, complete confidentiality, no police involvement, the musings of a Sweet Man, voicemail manhood, Clu Gulager, and so much more!

Also, if you like the show, please take a minute and subscribe and/or comment on us on iTunes, Stitcher, Blubrry or Podfeed.net. We distill the active ingredient in Hypnocil from your love and support.