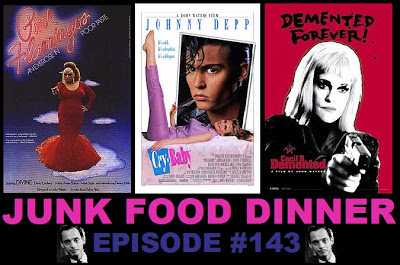 Welcome weirdos, drag queens and misfits, to yet another episode of everybody's favorite cult movie podcast. This week we pay tribute to cult movie stalwart John Waters. Sometimes called the Pope of Trash or the Prince of Puke, Mr, Waters has been shocking and entertaining unsuspecting audiences for over 40 years.

Up first, we take a look at the film that put him on the map; Pink Flamingos. This low-budget gross out fest stars larger than life drag queen Divine, who along with her misfit family, perform one disturbing act after another in order to retain the title of "The Filthiest Person Alive". However, Divine's arch rivals The Marbles (played by Mink Stole and David Lochary) will do anything in their twisted heads to take that title away from her in this seminal 1972 midnight movie that's just as shocking now as it was 40 years ago.

Then, we take a look at Waters' more family-friendly, yet still kitschy, work as we examine 1990's Cry-Baby. This send up of 50's juvenile delinquent movies stars a young Johnny Depp as the titular bad boy, who along with his gang of outcasts (including Ricki Lake, Traci Lords, Kim McGuire, Iggy Pop and Susan Tyrrell) try to win the heart of good girl Amy Locane. This popular musical comedy has also since been turned into a successful Broadway production.

And finally, it's Cecil B. DeMented from 2000 about a guerrilla filmmaker played by Stephen Dorff who kidnaps Hollywood starlet Honey Whitlock, played by Melanie Griffith, and forces her to be in his underground movie to take on the Hollywood studio system. Alicia Witt, Adrian Grenier and Maggie Gyllenhaal also appear as members of the rogue film crew in this pointed satire.

All this plus witty banter between friends, soundboard antics, revelations about Kevin's dad, Junk (voice)Mails, DVD & Blu-ray releases, Nerd News and so much more!