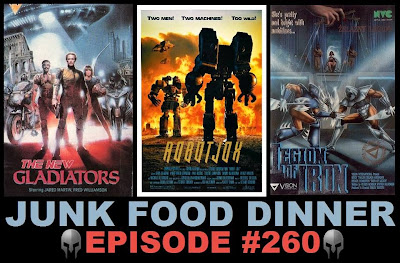 Hey, Junkies. Strap on your helmet and grab a laser sword. It’s futuristic Gladiator week! Parker's out watching The Avengers ... all week somehow, so we're joined by our brother Mark Freado! If you like Mark, be sure to check out his podcast ... though we don't know what it's called. Just search for Mark Freado's Dad on google.

Next, fighters duke it out in giant mech suits in “Robot Jox" from 1989. The film is directed by Stuart Gordon ("Re-Animator," "From Beyond") and pretty much bankrupted Empire Pictures.

Finally, a high school couple are taken to a queen’s gladiator arena in 1990 little-known flick, “Legion of Iron.”

Be our friend on Facebook or email us or send us a voicemail. Be a true friend!