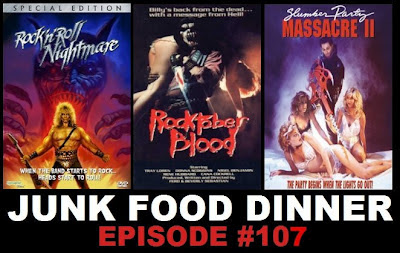 This week, we put on our spandex aerobics gear and tease our hair as we check out three '80s heavy metal horror flicks. First up, a band called The Tritons check into a creepy old house to record an album in 1987's "Rock & Roll Nightmare." The film, written by and starring John Mikl Thor, has one of the craziest endings in JFD history.

Next, a killer returns from the grave (?) to kill off his former bandmates in "Rocktober Blood" from 1984. This film is chock-full of Sebastions and Rainbow Eyes.

Finally, we catch back up with some old friends in 1987's "Slumber Party Massacre 2." The killer from the first flick is back and he's haunting dreams and playing rockabilly music this time!