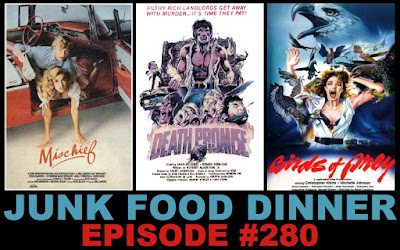 This week JFD brings you the three B's: boners, badasses and birds!

Up first, we're transported back to Ohio in the 1950's, where two high school kids (Doug McKeon and Chris Nash) fall in love with two foxy broads (Kelly Preston and Catherine Mary Stewart) and desperately try to get laid in the often overlooked sex-comedy Mischief from 1985.

Then, we take a trip to shithole 70's New York City, where greedy landlords are trying to force Charley (Charles Bonet) and the other tenants out of their crummy apartment in order to raise the rent. But when the fat cats have Charley's father killed, he teams up with his pal (Speedy Leacock) to get sweet, sweet revenge in Death Promise from 1977.

And finally, René Cardona Jr, director of Tintorera: Killer Shark, tells the tale of what would happen if birds mysteriously started attacking people (gee, where did he get that idea?). Christopher Atkins (the cretin from Blue Lagoon) and Michelle Johnson (the chick from Waxwork) play reporters traveling the globe to figure out what's causing this birdemic in Birds of Prey (AKA Beaks: The Movie) from 1987.

All this plus autumn snax chat, working from home, blu-rays, Nerd News, Kyle from Kentucky, movies shot on cell phones, boner memories and so much more!

Got a movie suggestion for the show, want to give your opinion on a movie we talked about or just want to tell us we suck? Drop us a line atJFDPodcast@gmail.com. Or leave us a voicemail: 347-746-JUNK (5865).
Also, if you like the show, please take a minute and subscribe and/or comment on us on iTunes, Stitcher, Blubrry or Podfeed.net. Check us out onFacebook and Twitter! We will finally lose our virginity with your love and support.
Labels: Beaks: The Movie Birds of Prey Catherine Mary Stewart Charles Bonet Christopher Atkins Death Promise Doug McKeon Kelly Preston Michelle Johnson Mischief Podcast René Cardona Jr Speedy Leacock