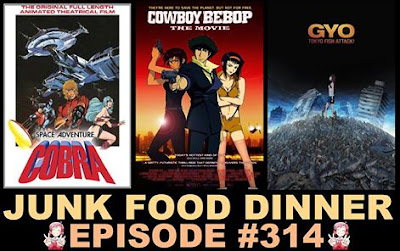 It's Ani-May here at the JFD studios, so grab your dakimakura and dive right in!

First, a space pirate falls in love with a bounty hunter (and her sisters?) whose planet is in danger in "Space Adventure Cobra" from 1982.

Next, a group of bounty hunters try to catch a terrorist on Mars in 2001's "Cowboy Bebop: The Movie."

Finally, killer robot fish invade Japan and then things just get crazier from there in "Gyo: Tokyo Fish Attack" from 2012.

All this plus live Sweetman action, DVDs, Grape Revenge, Otaku sonsofbitches, shit in the streets, Nerd News, shit in the sheets, Ghoul Summer news and so much more!