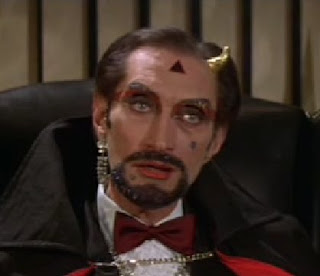 We watched "The Apple" this week. The film involves these weird, glittery triangular stickers people have to wear on their faces (by law!) to show their appreciation of this record label/band/vaguely asexual mafia. See that dude up there? That's the sticker I'm talking about.

Well, anyway. Last week I bought the Lady Gaga CD (so what? Wanna fight about it?) and it had an advertisement inside for some Lady Gaga earphones:

"The Apple," you wrongly predicted that by 1994, band T-shirts would be extinct, but you've proven more prophetic than we could have ever imagined.
Labels: Lady Gaga The Apple