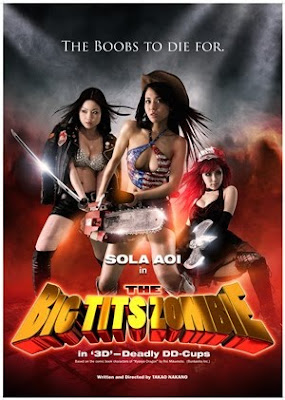 Wow, with a title like that, how can you go wrong?

Rena Jodo (Sola Aoi) is a stripper who just got back from Mexico and she has been offered a gig at a hot spring resort. When she arrives, she finds a deserted country town. There's hardly anyone in the audience at the strip club and all the other strippers, including Ginko (Risa Kasumi), Maria (Mari Sakurai), Nene (Tamayo) and Dana (Io Aikawa) are all bored stiff. They don't know what to do with their time and they are on the verge of fighting each other.

When they decide to go down to the basement of the club to kill time, Maria finds a "Book of the Dead" near "the Well of the Spirit." But who could have imagined the horror and panic that find would bring? Maria's reading of the book out loud has somehow revived the dead and zombies start appearing all over the world attacking mankind. It's Hell in the real world!

Dana and Nene are bitten by the zombies and they turn into living dead who attack Rena and Ginko. The poor big‐bosomed babes have no choice but to fight against Maria who now rules the zombies and tries to establish a kingdom of zombies. Rena and Ginko have to challenge Maria and the hordes of zombies! And how does the Blue Demon Devil (Minoru Torihada) fit in?

As a fan of crazy-as-hell Japanese movies (and there seems to be a lot of them lately), I am very curious about this one and hope we see a US DVD release of this very soon!