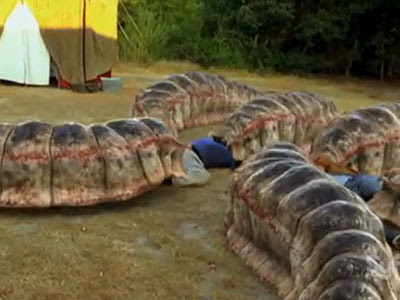 How can you not love SyFy Original Movies? Yes, the acting is laughable, the special effects are crude and the story lines are ludicrous, but hey, with titles like "Dinoshark", "Ice Spiders" or "Mansquito" how could you not be just a little intrigued?

The cable channel's latest offering of low-budget schlock comes in the form of "Mongolian Death Worm"... and if you haven't already guessed, it's about giant worms... that kill people!

Not that it matters, but this little gem is directed by Steven R. Monroe, who recently gave the world "Ice Twisters" (about man-made tornadoes that shoot icicles, from what I understand). Monroe also just wrapped up shooting a remake of the infamous 1978 rape/revenge flick "I Spit on Your Grave" which is set to be released theatrically in the US this September.

For those who have a high tolerance for ridiculousness (and let's face it, you probably wouldn't be here if you didn't), "Mongolian Death Worm" premieres tomorrow night, Saturday May 8th, at 9:00 PM on SyFy.