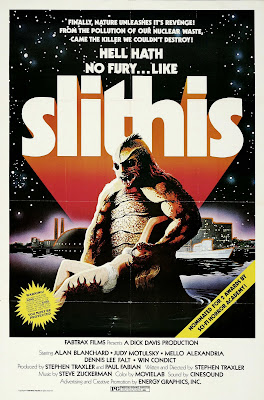 Finally, our long national nightmare is almost over. The fine folks over at Code Red DVD have announced that on June 1st of this year they will release Stephen Traxler's 1978 low-budget monster flick Slithis on DVD for the first time ever!

This is great news for weirdos like me, who have, despite better judgement, enjoyed this poorly-acted, poorly-executed, man in a rubber suit sleaze-fest for years. No longer will we have to put up with terrible 80's VHS copies that have been overplayed and washed out. No more will we have to bargain with stinky fat guys at horror conventions over ridiculously-priced DVD bootlegs transferred from those same shitty VHS tapes. Finally, we can see Slithis in all its digital glory.

No word yet on any special features or print info, but knowing the quality output of Code Red thus far, I think it's safe to assume we're in for a nice release.

Check out some footage of this golden turd on YouTube!
Labels: Slithis