No, not really. While fans of the 60's ABC Batman television series wait patiently for D.C. Comics, Warner Bros. and 20th Century Fox to pull their collective heads outta their asses and come to some sort of agreement on the release of the classic show on DVD, adult video production company Vivid Entertainment has swooped in

to tide you over in the mean time.

Check out the SAFE FOR WORK (I swear) trailer:

Not bad, right? Those costumes are spot on and they even nailed the title card font and the intro animation. And did they actually get a vintage BatMobile for this thing? How are they not getting sued over this? Does the word "Parody" in the title automatically clear them of any copyright infringement?

You can check out more at Vivid's page for the film (NOT SAFE FOR WORK, obviously, dummy).

Still, it does piss me off that this thing is on DVD, Blu-Ray even probably, and the ACTUAL 60's Batman show has never been released on home video... NOT EVEN VHS!!! 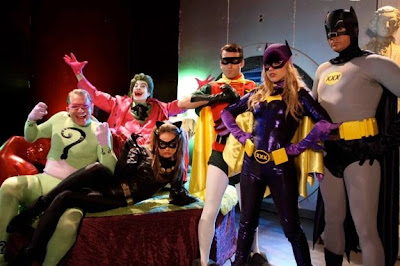