Hatchet 2 to be released unrated

Word on the web-a-nets is that Hatchet 2 will be released unrated. This sounds pretty cool in theory. I mean, it would sound cooler if the original Hatchet was totally awesome, but it pretty much falls into the "That was cool. I guess I might buy the DVD if I can find it in a $5 bin." And I probably only feel that favorably because Mercedes McNab from "Buffy" was in it.

Anyway, the fact that the sequel will be unrated is probably more marketing hype than anything else, because it implies it will be hugely gorey. In reality, it'll probably be more like all the unrated horror DVDs you've shelled out for that are 97 seconds longer than the theatrical release and you can't even tell what's been added until you check the "Trivia" section on IMDB.

Or perhaps director Adam Green is planning on taking the Jud Apatow unrated route and just add 45 minutes of shitty improv scenes where the characters learn things about themselves and come to terms with their feelings. 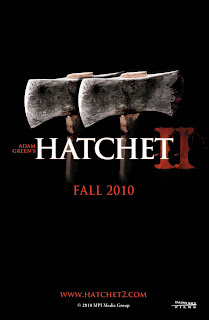