Well, football season is here again, and if you’re like me, there’s one name you’ll always associate with professional football. Vince Lombardi? Mike Ditka? Joe Namath? Hell no! Of course, I’m talking about Vincent Price! ‘Cause let’s face it, when you think gridiron greatness, the slightly effeminate, Edgar Alan Poe-quoting icon of horror is usually the first person to pop into your head. Not so much? Yeah, me either, but apparently, that’s exactly w hat the people at NFL Films where thinking back in 1987 when they put together the outstandingly perplexing VHS tape titled Strange But True Football Stories, hosted by the master of macabre himself, Vincent Price. 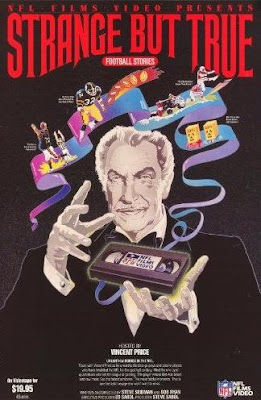 Check out the description from the back cover:

“Travel off the beaten path with Vincent Price as he unearths the strange plays and bizarre players who have inhabited the NFL for the past half century.

Step right up and see for yourself the one-eyed quarterback who led the NFL in passing one year. Meet the player whose diet consisted of blood and raw meat. See weird team rituals. The strangest games. Discover the fattest achievers who ever played. And relive such out-of-this-world plays as 'The Holy Roller,' 'The Immaculate Reception' and 'The Miracle of the Meadowlands.'

So enter, if you dare, into the weird, wild and wacky world of the NFL. This is one fantastic voyage you won't want to miss!”

Despite the bemusing nature of this video, it pleases me to know that it exists and in a weird way seems like a quite fitting way to settle into football/Halloween season.